Cloud Manager is an integral part of Adobe’s AEM as a Cloud Service (AEMaaCS) offering.

Hosting, operation, and scaling of Adobe Experience Manager is all managed by Adobe in the background including a SLA. Maintenance of Cloud Manager and upgrading of AEM is taken care of by Adobe as well.

Cloud Manager benefits smaller projects with the extensive out of the box build pipeline and stable deployment that promises zero downtime. Larger projects can free up resources in their devops and operations team which no longer have to focus on the intricacy of deploying and hosting AEM.

Lastly, overall system performance, stability and availability are improved since no one will know how to build and host Adobe Experience Manager better than Adobe.

Overall, Cloud Manager is a great cost and time saver due to a lot of functionality which is provided and maintained by Adobe.

We will explore and highlight the main functionalities so that you understand the tool and reasoning why we, at One Inside, think it’s so great.

What is Adobe Cloud Manager?

It consists of a CI/CD pipeline, various environments, code repositories and further information about the system like logs or SLA reports.

If you do not have access, either your company does not yet have the AEM Cloud Service licenses or your account is lacking the required permissions. 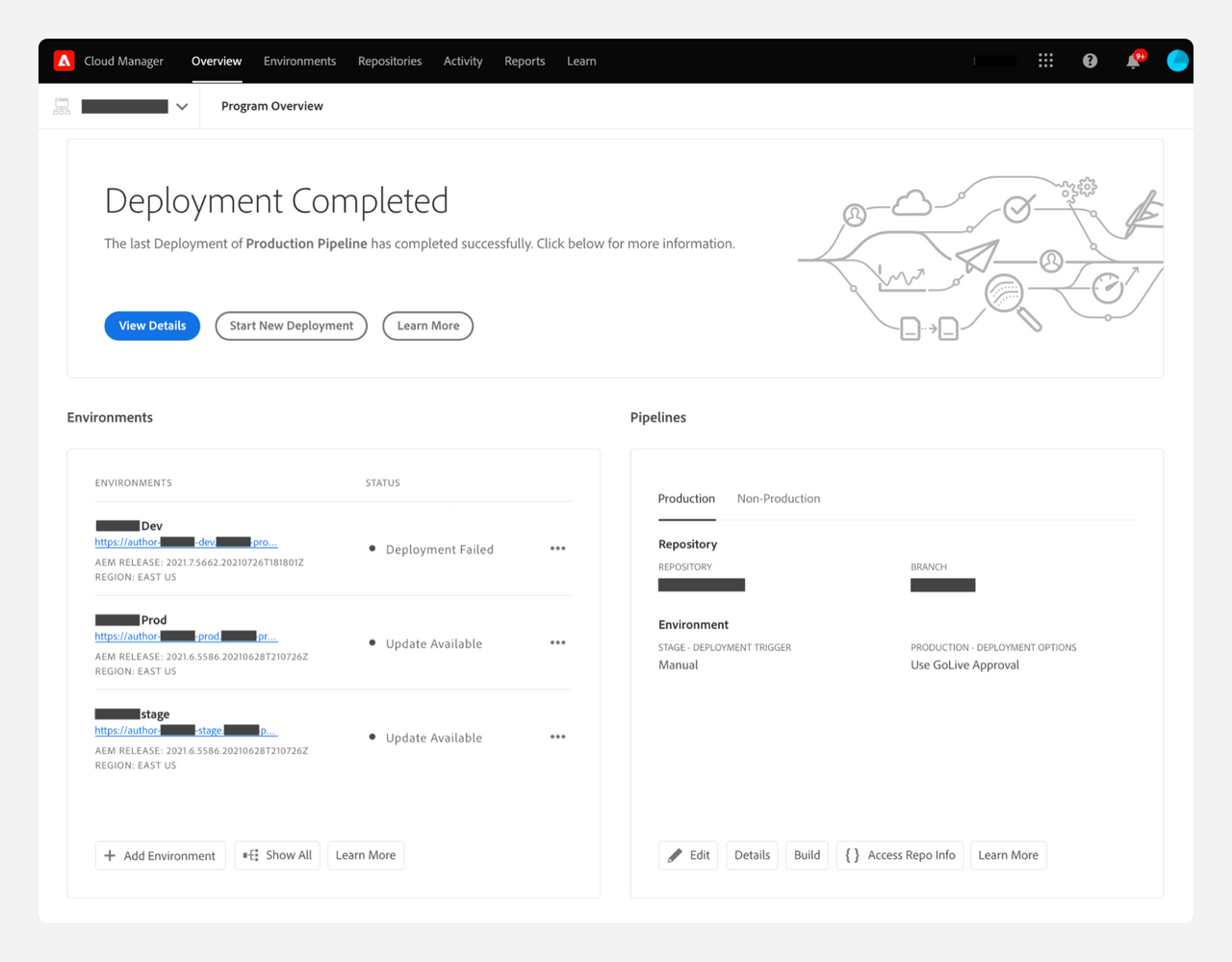 You can find the most important information about the environments and pipelines on the Startpage and have access to more detailed information.

These outlined core features result in a great set of benefits when using Cloud Manager:

As always there are some drawbacks, but the benefits far outweigh them and there are ways to work around them:

The Cloud Manager CI/CD pipeline brings the code in the repository to a build application on your productive Adobe Experience Manager environment.

Every “Production” deployment first goes to “Stage” where it is analysed and can be further inspected manually before being approved and deployed to “Production”.

The pipeline runs are shown in the UI and additional logs of each execution step can be downloaded to debug any issues. There are several steps in the pipeline explained as follows:

To use an external non-Adobe repository, the changes have to be synchronised with the Adobe repository (this can easily be automated with various CI/CD tools like Github Actions, Bitbucket Pipelines or Jenkins).

This inspects the whole code base and applies static code analysis.

There are several rule sets for different topics like test coverage, potential security issues or maintainability in the context of AEM. Each topic is rated and a recommendation is given by Adobe.

These recommendations are set up quite reasonably at 50% coverage. The goal of each project should be to reach those numbers.

The code is now deployed to the stage environment. Internally, Cloud Manager creates a copy of the whole stage environment before deploying it. If there is any issue or failure with the deployment, the Stage can be reverted to the previous state.

Various tests are executed by default by Adobe to test if AEM itself is still working as expected and some tools to measure the performance of the website. Additionally, custom tests can be added to further test the integration of the application into AEM or the website itself. 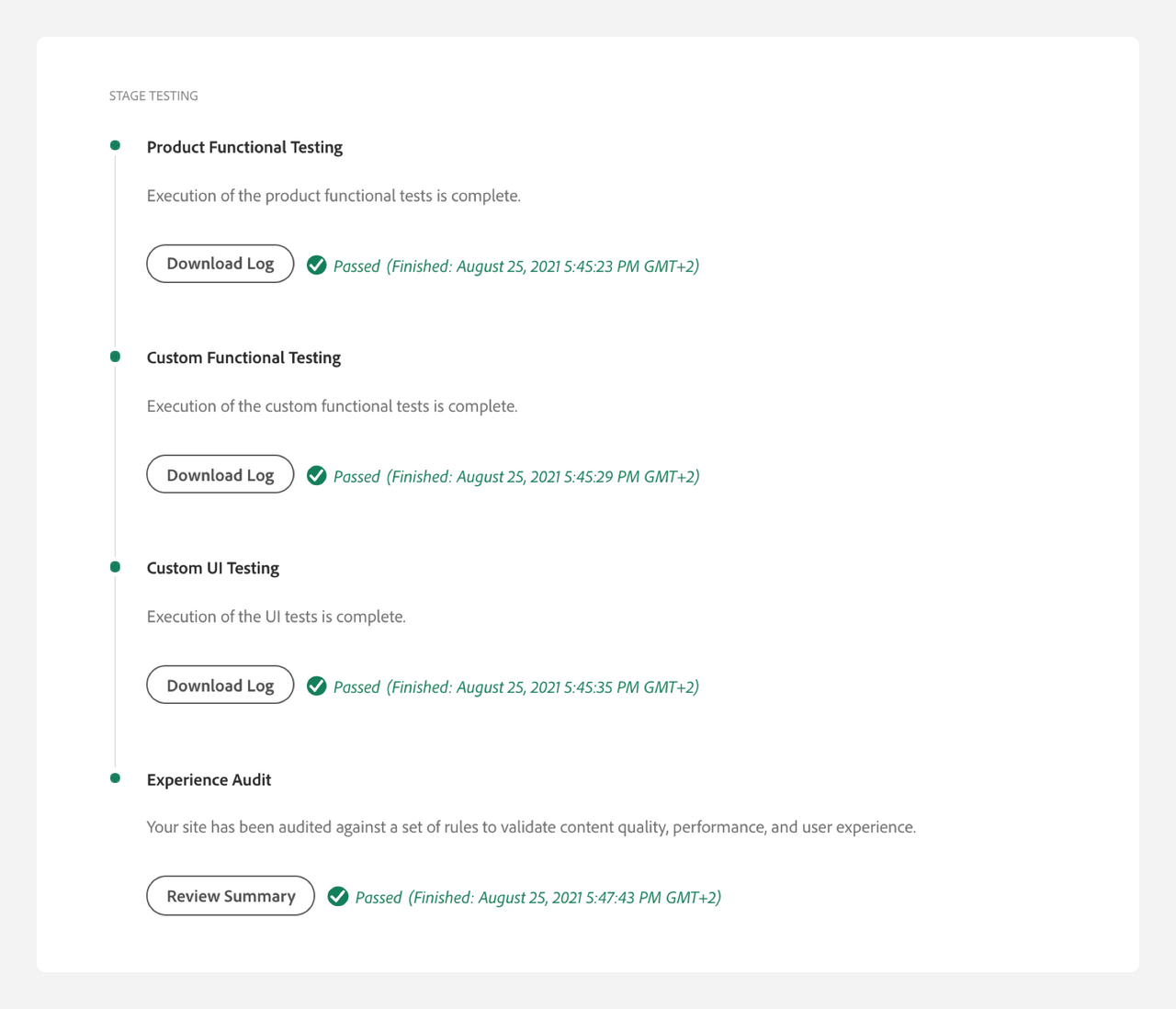 If not disabled, the pipeline halts at this point before deploying to Production. This allows us to inspect the performance tests and code audit test results.

Any further manual testing can now be done on Stage. If everything looks good, the build can be approved and will be deployed to Product. Otherwise, the build is cancelled and reverted. 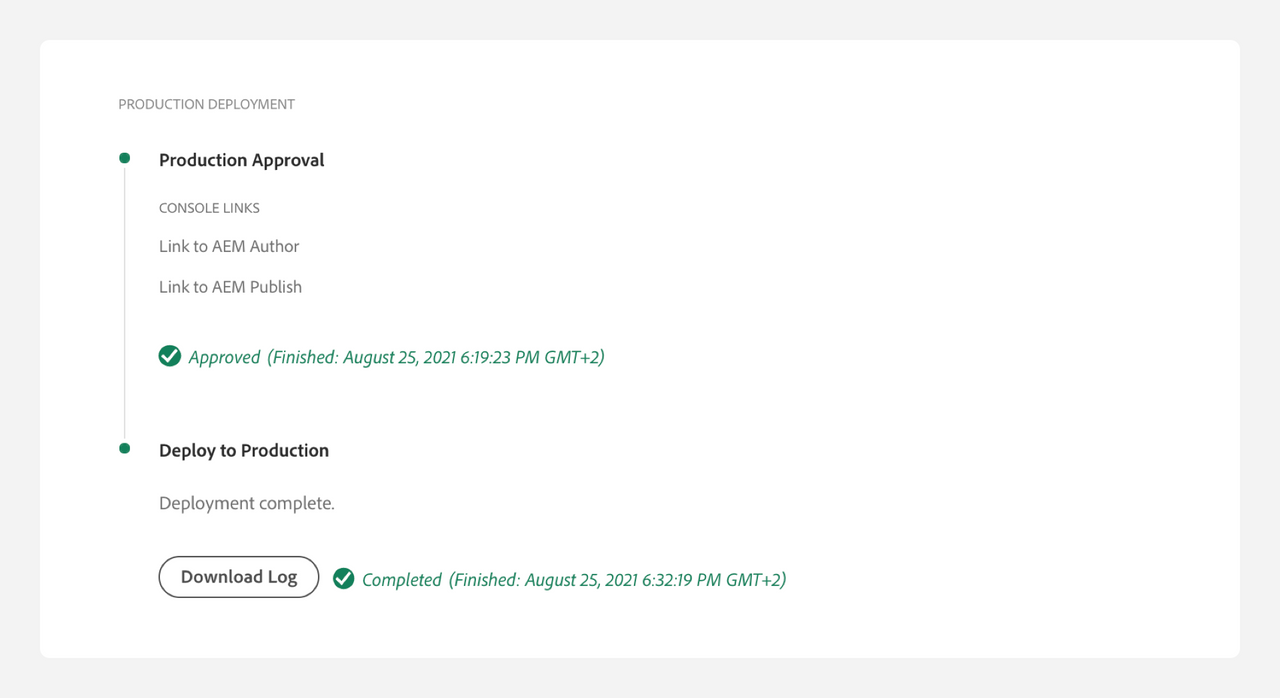 Four different categories of tests are executed in the pipeline.

These are executed before the deployment step. They test the application on a code level and in isolation.

Since unit tests are pretty much industry standard, there is mainly one interesting question: how high should the coverage be?

There are different viewpoints on this topic.

Adobe is quite defensive or realistic with the expectation of 50%. From our perspective, for web based projects and especially content focused logic, the integration tests discussed afterwards provide a lot of value.

For each project it has to be decided how much time is spent on each type of test.

This is executed before the deployment step. It inspects the code itself by doing static analysis. It gives various metrics indicating the quality of the code base by a set of code quality rules defined by Adobe.

Internally, SonarQube is used to analyse the code. Additionally, OakPAL scans the built content package to catch various potential issues which might not work with the deployment.

There are three categories of criticality:

There are the following types of ratings, each with different failure thresholds (check code quality rules documentation for details). 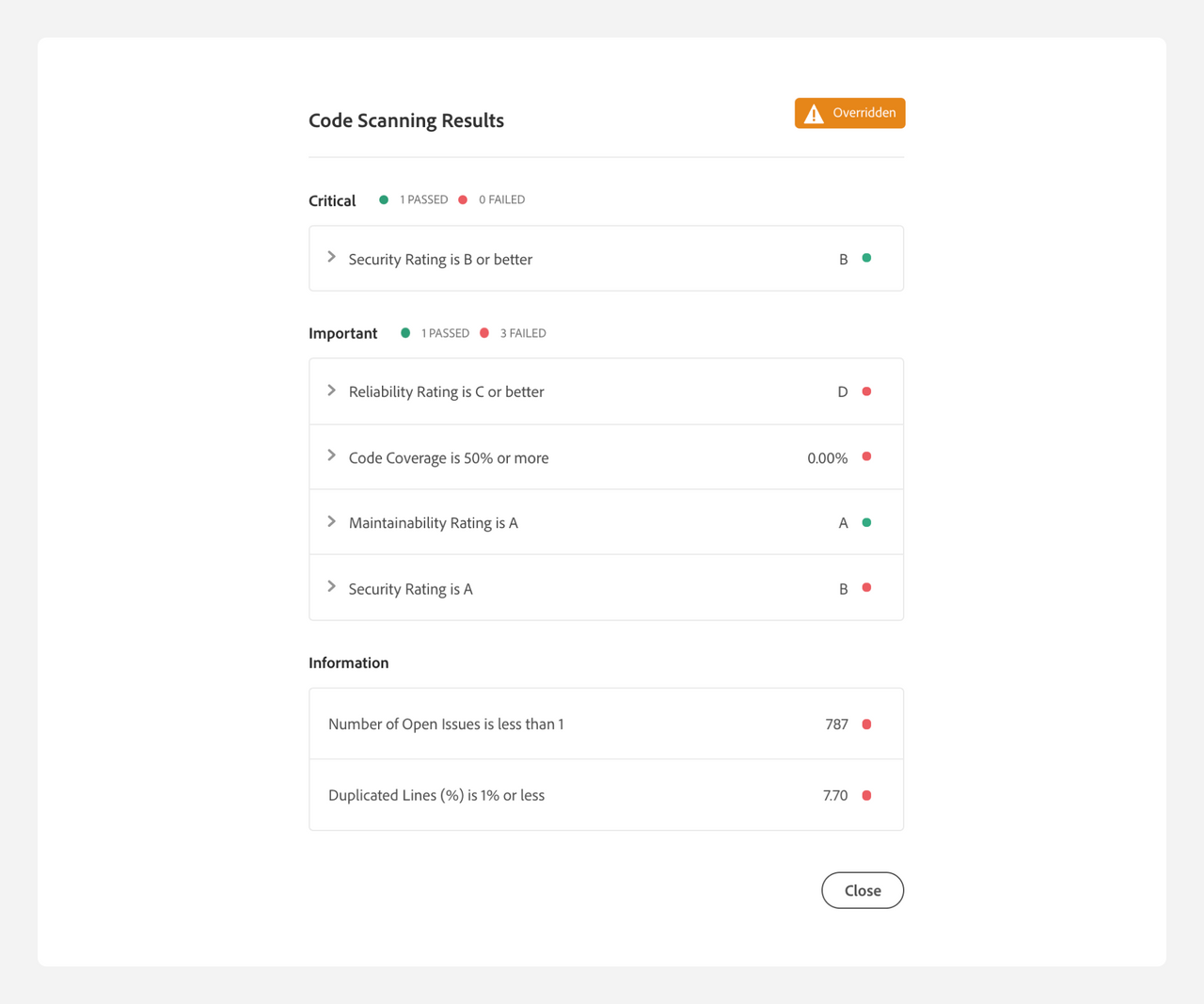 Over 100 SonarQube rules are applied. If a specific issue is a false positive and should be ignored, an Excel from the link above can be downloaded to look up the rule key.

The key can then be used in the Java code to make sure SonarCube will skip the warning. An example for “Credentials should not be hard-coded” is ​​”squid:S2068″.

In the Java code add the annotation: @SuppressWarnings(“squid:S2068”)

This executes the well known Google Lighthouse Tool, the same that is available in Chrome Dev Tools.

It indicates changes compared to the last release. It’s also possible to inspect and download the full Lighthouse report.

This is a great feature to have, especially because the tests are executed on every run and in an isolated, repeatable environment.

What is missing is a view for the audit over time, that would be really helpful to track performance. 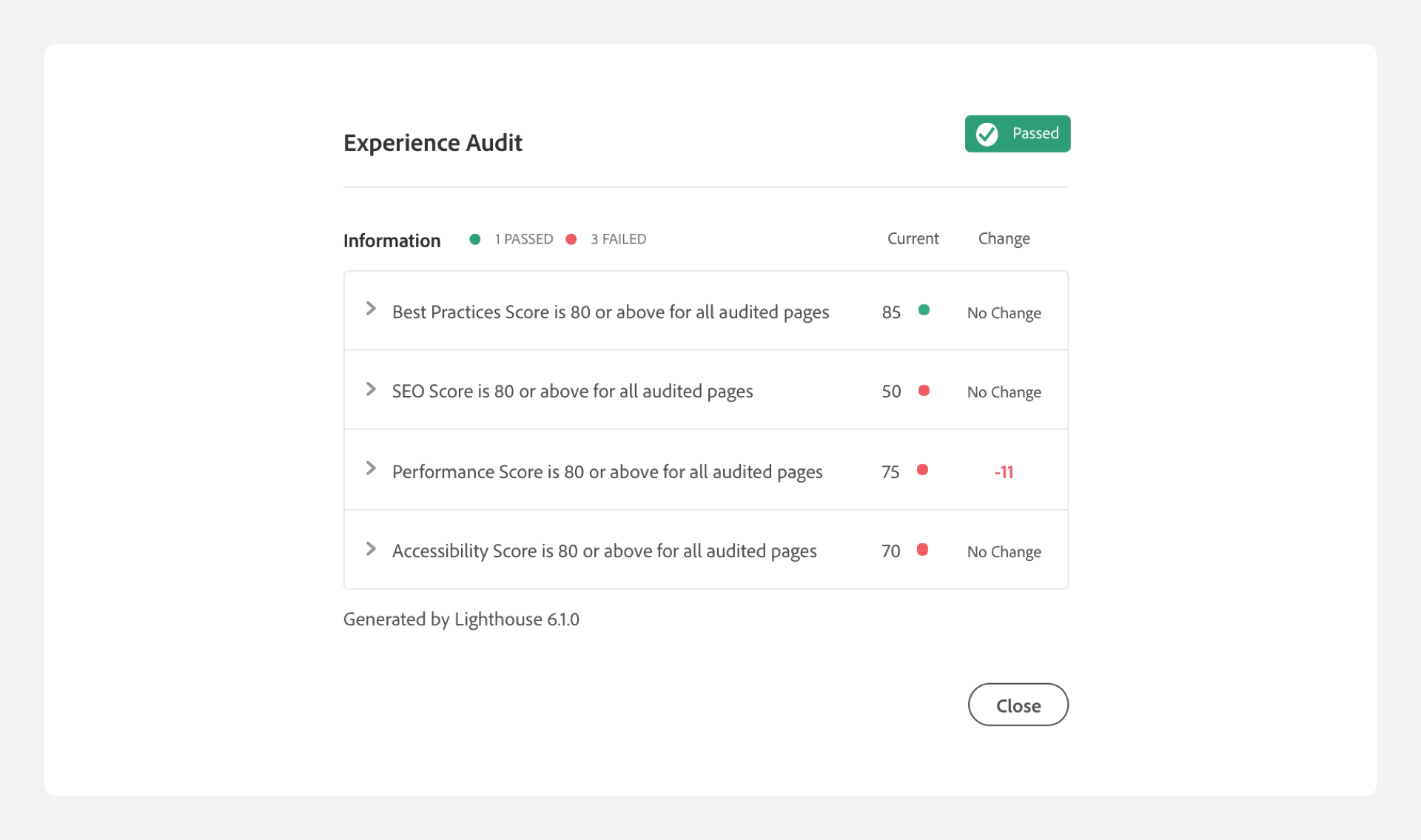 There are several integration tests.

Adobe provides a set of tests to verify the basic functionality of AEM, for example, if content can still be replicated from Author to Publish. Adobe might add additional tests in the future as well – who doesn’t like free integration tests!

In addition, custom tests can be written to further verify the functionality of AEM. This is especially useful if there are custom AEM modifications.

UI Tests are intended to test the website itself on the publisher instance via dispatcher. The idea is to provide test content with the code which will be deployed to the stage and then execute the integration tests in various browsers to verify functionality.

There is a default setup in the Maven Archetype for Integration tests based on webdriver.io and Selenium.

Docker is used to build and execute the integration tests in the cloud. It’s possible to modify those to adjust the test setup. Important to note is that UI tests are disable dy default.

Follow the documentation for “Customer Opt-Int” to understand how to enable it.

There is a set of predefined roles by Adobe, which also have their according permission profile and access restrictions of who is allowed to run or modify the pipeline and other features.

Most of those roles probably match the existing roles of a project.

The most important ones are Business Owner, Deployment Manager, Program Manager, Developer. Content Authors do not have to interact with Cloud Manager. Permissions for Authors are set up in AEM itself.

We believe it’s not necessary to use this many roles for most projects and if you can trust your developers, it’s probably enough if the lead is “Business Owner” and developers are “Deployment Manager“.

Have a look at the user permission table to decide what makes sense for your project.

A notable role that is missing is “DevOps” or “Operation“. Deployment Manager is what comes closest to a DevOps person, since it’s allowed to edit the pipeline, however, any experienced developer should be able to configure Cloud Manager.

If there are integrations of Cloud Manager planned, a person with DevOps experience might become helpful.

Adobe is aware that every customer has its unique application landscape. There are various ways to integrate AEM Cloud Service and Cloud Manager.

All capabilities available in the UI can also be programmatically accessed with the Adobe Cloud Manager API.

This allows to integrate the AEM Cloud Service Pipeline into a custom existing CI/CD infrastructure and also enhances the pipeline with additional custom features.

Webhooks are also supported by the API which is a great way to integrate with other services.

Some example use cases are triggering of the pipeline from an external action, monitoring and notification (e.g. Slack channel) of the pipeline runs, externally executing additional tests, or adding actions after the deployment like clearing of the cache.

Provisioning and access to control for the Cloud Manager and AEM can be handled manually but also via integration of external IMS.

By default, the AEM Cloud Service instances do not have access to external systems due to security reasons. Simple IP whitelisting can be configured directly in Cloud Manager.

For anything more complex, a solution can be worked out with the Adobe Cloud Manager engineer.

Via support it can be requested to configure forwarding of the Splunk logs to a custom Splunk instance. This is a great way to extract as much information from the system as possible.

As we can see, Adobe Cloud Manager provides out of the box enterprise-grade CI/CD and hosting of AEM applications in the cloud.

There is a big cost-saving potential for both the initial setup as well as maintenance, thanks to the simple configuration in the web UI and all the operation efforts being taken care of by Adobe.

Combined with the powerful capability of AEM itself and the Adobe Experience Cloud as a whole, AEM Cloud Service is the best cloud-native CMS offering on the market.

This article is part of a series of content about AEM Cloud Service, where we explain how to move to AEM Cloud.

Learn how to design an AEM website with Core Components. Finally, once your website is live, start optimising it and improving the customer experience.

Subscribe to our newsletter and we will send you the next article about AEM Cloud Service.